Regardless of where you live, the different levels of your government (federal, local) will employ a certain number of people such as doctors, teachers, employees in culture, utilities and so on.

Every now and then, however, the government will have certain jobs that need to be done and that they need to hire outside contractors to get them done. For example, your town might need someone to restore the town fountain or do holiday lights. Or, your state’s government needs a tech company that will upgrade their entire IT system. The government puts these jobs out to bid and companies compete for these contracts, for a number of reasons we will get into later.

But, can your small company compete? Should it? How can it?

The vast majority of government contracts are, at least on paper, open to any company that can realistically deliver on their promise. In fact, most governments in the world encourage small-to-medium businesses to compete and they often have programs in place to promote SMBs’ involvement.

Even when the government contract is far too big for an SMB to realistically compete, large contractors often subcontract parts of their contract to smaller companies who then do part of the job and get a portion of the money.

In short, if your SMB is registered and you know you can deliver, there is no one that can stop you from bidding and winning a government contract.

The Upsides and the Downsides

Now that we have established your SMB can chase government contracts, the question that needs answering is whether it should.

There are some very good reasons why you would want to bid for and win government contracts as a small business owner. The first and the most impactful one is the stability such a contract provides. Namely, once you win a contract and your federal or local government awards you with it, you can rest assured you will be paid no matter what. You will not have to worry about shrinking economy, new competition springing up or anything like that. You will at least have something to fall back on, even if everything else tanks.

It should also be mentioned that, in the vast majority of cases, the government will pay handsomely, especially in certain areas, such as IT. In other words, you would not be doing anything pro bono. You will be getting paid.

Often times, seemingly one-off government contracts can turn into an ongoing relationship. For example, let’s say you won the bid to install solar collectors on all government buildings in your city. In such a situation, you would probably also win the maintenance contract which can last for years and decades and which can provide your SMB with a continuous stream of revenue for years to come.

The Not So Great

Of course, as it often goes, not everything is rosy when it comes to government contracts and competing for them as an SMB. For one, there is the innate bias towards old partners when contracts are awarded. Simply put, government officials are averse to risk and they go with large companies and people they know. Much of it is politics and it can get a bit discouraging at times.

Furthermore, bidding for and winning government contracts involves jumping through innumerable legal and bureaucratic hoops. For instance, do you know what are bid bonds and performance bonds? Do you know the difference between a Request for Proposal and an Invitation for Bid? Do you know where your local government posts its contracts? Do you have a local agency you can contact to help you with paperwork and regulations?

And this is merely scratching the surface.

There are also business owners who feel that getting into government contracts, especially those that last for some time, can be too constraining. Namely, such contracts tend to be very strict and they can require quite a bit to honor in full. Some SMB owners feel that this limits their options and ties them to one thing for far too long.

In the end, like always, it will come down to what you think is best for your small-to-medium company. Government contracts can definitely be a boon for a small business, providing much-needed stability in today’s crazy business climate. That being said, winning such contracts can be quite challenging and you need to understand that no one will hand you a government contract on a silver platter.

Be smart and patient, weigh your options and don’t give up just because you think your SMB is too small. 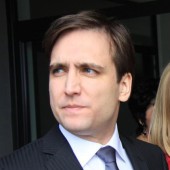 James D. Burbank is the editor in chief of a business-oriented blog called BizzMarkBlog. He is also a big Utah Jazz fan.